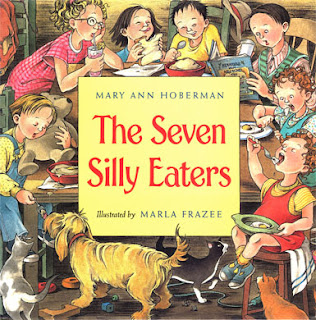 Of all the baby and toddler books that we have ever read, I have one firm favourite – the same favourite that Ava happens to have; The Seven Silly Eaters by Mary Ann Hoberman.

We’ve had it for over a year, and yet even when Ava was pretty young, she would sit enthralled at the cascading rhyme that runs throughout the story and the brilliant artwork by Marla Frazee

The story is about Mr and Mrs. Peters and their seven children, all of whom have very unusual eating habits. Peter only wants milk,  Lucy only wants pink lemonade,  ('Not from a can...Oh, no...Homemade’),  Jack only wants applesauce, Mac oatmeal (‘But if his oatmeal had a lump, Mac would dump it on the cat, Mrs. Peters hated that'), Mary Lou only eats homemade bread and Flo and Fran poached and fried eggs. 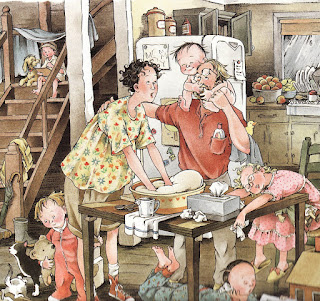 Over the years, with each new addition to the Peters’ clan, Mrs. Peters does her very best to accommodate the specific wishes of each child but ends up feeling, well, just a little frazzled!

'Creamy oatmeal, pots of it!
Homemade bread and lots of it!
Peeling apples by the peck,
Mrs. Peters was a wreck.'

Noticing their Mama’s exhaustion, the children decide to make Mrs. Peters a special birthday breakfast made up of all the food that she makes them every day. They wake up at the crack of dawn on her birthday and sneak down to the kitchen, however since none of them know how to cook, it ends up being a disaster, and they fling their concoction into one pot.

'But when they saw what they had done
They wished they never had begun
They'd hardly slept a wink that night
And still things hadn't turned out right.
And even though they'd tried their best,
It hadn't worked,
They were depressed.'

Hiding it in the oven, which is still hot, they wake up to their Mama dancing around the kitchen with glee. In the oven is a ‘pink and plump and perfect cake’ – and since this birthday cake is made only from the special foods each child likes, it becomes the single meal they prepare every day – each of them helping and taking turns to fix it.

It is such a heartwarming story and Mrs. Peters comes across as such a gentle, lovely Mama, with her brood of fantastically individual children on her little homestead, that it certainly appealed to us.

The drawings match the up-beat, wry and heartwarming rhyme perfectly, and leave you feeling as if you know the Peters family very well. Ava certainly knows each of the children and what they love to eat. Sometimes when she eats oatmeal she will point at it and say, ‘Mac! Mac!’ which I just love.

Mary Ann Hoberman was the children’s Poet Laureate from 2008 until 2010 and it is easy to see why. We also have A House is a House for Me, which has the same kind of riotous and whimsical rhyme. As for Marla Frazee, the illustrator, her drawings are second to none. Another children’s book she has illustrated – Everywhere Babies – is another favourite here, and the only kids book I own where there are several gay couples depicted throughout, as well as images of breastfeeding and babywearing Mamas too!

I hope you get a chance to read The Seven Silly Eaters at some point. I keep buying it for people I know, so certain I am that they will fall in love with it too. After a year of reading it aloud to Ava at least once a day,  I know most of it off by heart – sometimes I even wake up reciting the lines in my head! For us, it is the perfect family, read-aloud story. 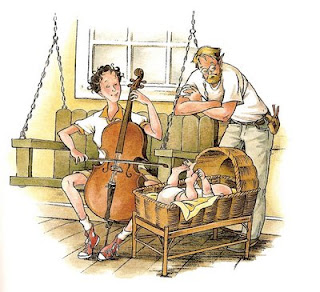 Posted by Crafty By Nurture at 8:57 am