In our home, we love reading. Bookcases in each bedroom, as well as the living room. Ru, especially, is a voracious reader. And one author we love over several others is the wonderful Oliver Jeffers.

Our first Oliver Jeffers book was the magical How To Catch A Star, and that was it, we were hooked.

We eagerly tracked down every other existing story he had written, and very quickly his quirky tales became firm favourites in our home, and were books that Ru asked for again and again. So often, in fact, that he will 'read' the stories to himself from the pictures.

So, when we found out that another story was in the pipeline, we pre-ordered it on Amazon and sat eagerly waiting, biting our nails, until it arrived... 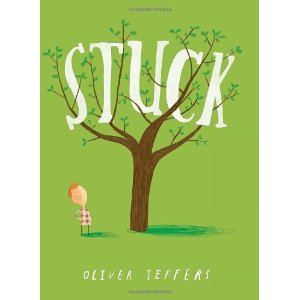 All of Mr Jeffers' books are so beautifully unique, and 'Stuck' is no exception. The story of Floyd who gets his kite stuck in a tree is outlandish, ridiculous and silly. I wouldn't have expected anything less.

From a paper-plane chopping bear, to a boy with unusual literary tastes, to stuck up pigeons, his books are filled with curious characters and Stuck's Floyd is no exception. His brilliant solution of throwing more and more crazy things at a problem in order to fix it had us in stitches, more so than any of his other books.

I can imagine Oliver Jeffers talking to his Inner Child as he wrote this book, asking him what was going to throw up into the tree next, and the giggling inner child answers 'A whale!'. 'A... whale?' asks Oliver hesitantly, with the same tone of voice that I use when my three year old tells me he wants toothpaste for breakfast, 'Are you sure?'. The Inner Child answers with an emphatic yes, going on to urge him to include an orangutan, a fire engine and also a sink.

The drawings are brilliant, as standard, with Jeffers' signature handwritten text telling the story with his usual creative flair. They don't have quite the detail that, say, 'The Heart And The Bottle' does, or the fascinating multitude of textures that are prominent in 'The Incredible Book-Eating Boy', but they are undeniably Jeffers-esque nevertheless.

Some people have criticised this book for not having enough of a story... Granted, it doesn't have the heart-warming conclusions that 'The Way Back Home' and 'Lost and Found' have led us to expect from his work, but for pure hilarity, 'Stuck' is a winner every single time, often reducing grown men to fits of giggles.

With Ru being three, Stephen and I are often asked to read the same books over and over and over and over and over and over and... well... you get the idea. I have no shame in admitting that we have previously, when faced with yet ANOTHER request for 'The Cow Who Laid An Egg' or 'Dippy Duck Dresses Up', taken to hiding the book in question so we don't have to read it again, squirelling it away under the sofa or in a cupboard, only to feel guilty weeks later on discovering the forgotten, dusty book.

'Stuck' will NEVER be one of these. My record right now stands at reading this 5 times in a row, (one ahead of its closest competitor 'Captain Flynn and the Pirate Dinosaurs: Missing Treasure!') and I am STILL not bored of it, nor do I think I ever will be.

I found out today that Jeffers is to release another undoubtedly stellar story soon, 'This Moose Belongs To Me', but it will have a LOT of hard work to do to live up to the sparkle and general good-feelings left in our family after a snuggle on the sofa with 'Stuck'.

In the meantime, enjoy the video. This is Ru and Tom G. (one of his godfathers) reading 'Stuck'. And laughing.

"CATS get stuck in trees
all the time, but this
was GETTING RIDICULOUS."
~Oliver Jeffers 'Stuck'

'Stuck' is also in our Amazon store here!
Posted by Crafty By Nurture at 10:59 pm