Now, I don't know about you guys, but in our home, when one person catches a cold, you can pretty much guarantee that everyone else will eventually get it!

However, no one EVER gets ill as badly as my husband Stephen does. If ever there was a dictionary definition of 'man flu', his picture would be next to it. He sniffles, down-hearted on the sofa, troughing through large amounts of throats sweets that only seem to numb for a short while but don't seem to actually solve the underlying issues.

I decided that I was going to make him some special sweets for his throat, in the hopes that it would get rid of my gently weeping man-child. (Okay, so Stephen hasn't actually been *weeping*, but he hasn't been at his best!)

All you need for these is;


Remember my post about toffee apples? It's a very similar process.

Get a saucepan and throw in about half a jar of honey, followed by a sprinkle of cinnamon. You could also add ginger too, or instead of the cinnamon if you liked, or omit them all together and have them as pure honey. 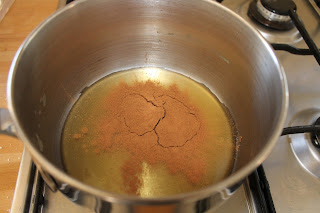 We're going to gently heat it to a rolling bubble until it reaches the 'hard-crack' stage.

Now, as most people don't own a sugar thermometer, so I'm going to teach you how to identify when your sugar has reached this stage.

Make sure you have a glass of cold water. Every so often, using a wooden spoon, drip a little of your honey mixture into the water. If you want your sweets to be more like boiled sweets, then heat until it immediately hardens and can be snapped when dropped in the water.

I wanted more chewy sweets though, so when you drop your honey mix in the water, you want it to harden, but also to have a tiny bit of pliability to it.

Grease a silicon icecube tray with butter and slowly, carefully fill each section with your mixture. You'll notice a couple of mine have lollysticks in, I wanted to test how they'd work as lollies. Not well, would be the answer to that. 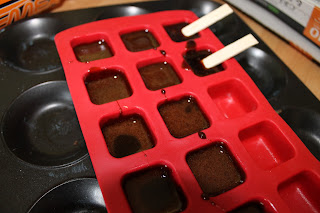 If you've not used cinnamon, then your mixture will be deep golden and clear.

Leave your sweets to set at room temperature. Whilst they're setting, lightly butter some greaseproof paper and cut into wide strips.

When the sweets have set, pop them out of the tray and wrap each individual sweet in the greaseproof paper. This prevents them from sticking to one another in storage. 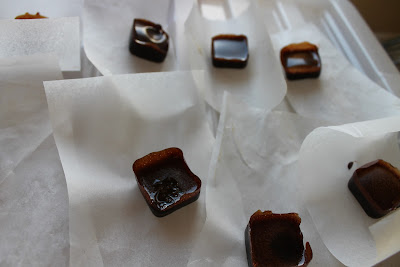 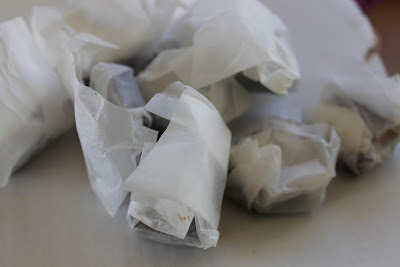 My husband now has a little tub of these in his work van to ease his sore throat! They are delicious, I have to say. (I even snaffled a few to keep for myself. I'm not ill. They just taste good.)

Remember, it is not advisable to give honey to children under the age of one, and small sweets can be a choking hazard for younger children, so use your common sense.
Posted by Crafty By Nurture at 2:28 pm