Father Christmas? No thank you!

The Christmas tradition that I remember most vividly from my childhood was to do with Father Christmas. On Christmas Eve, we would put out a mince pie, a glass of milk (we don't want him drinking and sleighing now!), and a carrot for Rudolph. Oh, and a blue Smartie for the mouse. You didn't leave a blue Smartie for the mouse who shrinks, climbs through the keyhole, unlocks the door, and lets Father Christmas in? Well, how else does he get into houses that don't have chimneys, eh?

My little sister and I would wake up in the morning and discover that only crumbs remained of the mince pie, the carrot and Smartie had been nibbled and the milk had been drunk. Proof, in our eyes, that Father Christmas had truly been. That, and the massive pile of gifts under the tree.

This would happen every year, even long after my sister and I knew the truth about the man in red. It was one of those things that I planned to do with my children.

That is... until I actually had children.

I remember my first conversation with Stephen about the big man, and tentatively saying "I don't know if I want to tell Ru about Father Christmas.". To my surprise, Stephen agreed with me.

As parents, we try to lead by example to our children. We try and be calm in the face of crisis, whether that be a broken washing machine or a broken crayon. We try to be gentle with others, affectionate to those we love, giving Littles positive behaviour  to model their own on. We don't tell untruths either. Herein lies the issue.

Whilst I loved the magic of Santa sneaking into the house and delivering gifts when I was a child, the prospect of telling what is effectively an extended lie to my children for what could be upwards of five or six years seems very wrong. It just doesn't sit comfortably.

Don't lie, children, it's wrong. But a man in red delivers your gifts every Christmas.

How can I expect my children to be truthful when I am telling them a pretty massive lie? It really is a difficult one, as we want to encourage and embrace the special magic of this time of year, but do it in a way that doesn't involve telling a child about the absolute real existence of a fictional character. But also doing it in a way that doesn't then upset other children who do believe. And that's just the start of it. What then of the Easter Bunny? The Tooth Fairy? Any fairy? How far do you go with being truthful about what's real and what's not? It's a toughie, I can tell you.

Then we have the bribery side of it all.

"Be good or else no presents for you!"

I was regularly threatened in November and December with the prospect of no gifts. I was made to eat all my dinner with a swift comment of "Well, I'd better phone Father Christmas then and tell him not to bring you anything.". I was coerced into tidying my bedroom with a "He doesn't bring presents to children with messy rooms.".

It really is bribery. Do it or ELSE.

Don't get me wrong, I am so not above bribing my child on occasion. We've all done it. However, this whole thing of only good children getting presents seems like an awfully scary threat to a Little. Even his nursery teachers have used it to get him to 'sit tidily' and to clean up.

When you really think about it, it's not bribery... it's actually a threat. And the prospect of threatening my kids isn't a fun one, I can tell you.

I think, what makes me most uncomfortable though, is this withdrawal of gifts. We tell our children that we love them, and that gifts are given with love but woe betide you if you are naughty! No presents for you. And their little head links no presents with no love.

Stephen and I are finding it especially difficult this year as Ru is really at an age where he understands that Christmas and Yule are special. He's also 3, and very impressionable. We've already had him ask "Who is Father Christmas? So-and-so at school says that he gives presents. Will he bring me some? My teacher says I have to be good or I won't get anything."

In the end, my response to his question was very simply... no.

My Small Sweet Boy, some people like to believe that Father Christmas brings presents for them on Christmas. And that's ok. It's a lovely story and a lovely idea. Yule and Christmas are about being kind to those we love, and letting them know that we care about them very much. We give presents to remind them that they are very special to us. Your presents come from your Mama and Daddy and Pixie who love you SO much.

For me, the idea that we give gifts to those we love, but that those gifts, and thus our love, are conditional really makes my stomach churn.

I don't want him to do these things out of fear that he won't get presents. That doesn't seem like an awfully good life lesson to learn at all. I don't want him to keep the idea in his head that gifts, and our love, are conditional, based only on his behaviour. All children need to know that they are loved unconditionally, no matter what they do.

I have absolutely no doubt that in many homes, Father Christmas is welcomed and celebrated as the Bringer of Presents, and that this person is both magical and benevolent, loved by all. But the argument that by not 'doing' Father Christmas, that I am taking away the magic of Christmas for my children, then I have to say that, with all due respect, I think that that argument is wrong.

The magic of this time of year, whether you celebrate Hannukah, Christmas, Kwanzaa or Yule, is in US. Yes, it is great to get presents, but the real special magic is in seeing the joy on someone else's face when they open their gift that we made specially for them.

It's in those bedtime hot chocolates with extra marshmallows.

It's in sitting in the dark with only the twinkling tree lights for company, sharing what our favourite part of the day was.

It's in making decorations together as a family.

It's in seeing birds in your garden enjoy the feeders you made them.

It's in being woken up to look out of the window at the spectacle of a world made unfamiliar by snow.

It's in sleepy snuggles under a cosy duvet, and secret present wrapping, and a new dress made by your Mama, and special books, and a trip out to see the lights, and making cinnamon cookies and gingerbread men, and the sequin you find in your hair from crafting earlier in the day, and celebrating one another.

It's in memories that he and his sister will remember and share with their own children one day.

It's not in a portly gentleman in crimson who breaks into your house, eats your food and leaves presents. 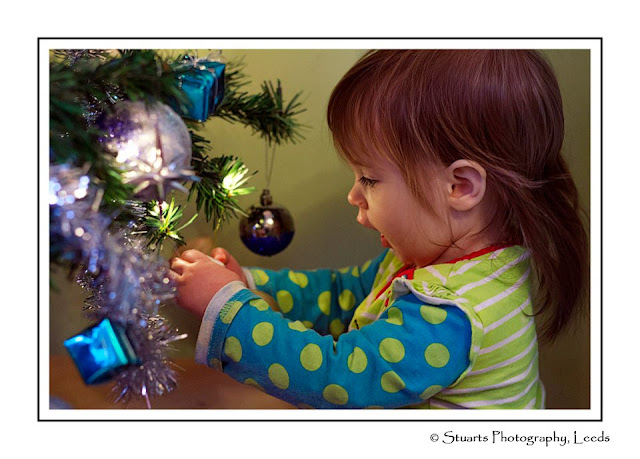 “We do not need magic to transform our world.
We carry all of the power we need inside ourselves already.”
~ J. K. Rowling
Posted by Crafty By Nurture at 8:38 am