A Lament  An Epiphany by Stephen

As a child, I watched an inordinately large amount of television. We had a Rumbelow's rented 'Baird' brand TV with a top loading jet-engine of a VCR, and a membership to our local video shop. This combination fuelled my love of the moving image.

To cut a long story short, my mum was exceptionally ill with cancer for most of my childhood so quite a lot of my weekends involved the renting of a film or two from the video shop and watching them until the magnetic tape inside literally melted. By the time I was a teenager, I had seen a wide range of films (from Ferngully to Robocop and beyond) and had a passion for the little black-hole sat in the corner of our living room.

This is a habit I have carried through my life and enjoy nothing more than to recharge in front of a well-acted or visually stunning piece of celluloid history. In fact, my wife and I first bonded over our love of the film 300. I believe Emi has also mentioned before about filling up your cup and watching films is one of mine.

Skip a few scenes (see what I did there?) to October 2012 and picture a conversation between my wife and I:

Emi: I think we should have a month without TV

Me: Noooooooooo! (with all the extended vowels of Darth Vader realising Padme was dead)

And thus it was decided, we were to experiment with a complete ban on TV/laptop based viewing for all Ralphs to see what difference it would make to Ru, and us, as a family. I'll admit I was sceptical, actually, I nearly cried! It had taken me near 4 years to convince my wife we needed an 32 inch LCD TV and now we were to neglect her for a whole month?! (That's right, our TV is female.)

To put things into context however, we don't watch that much television as a family because we don't own a TV licence - it's all above board, we have declared our TV usage to the licensing authority - so it is never on as background noise as we have been used to in the past, pre-children. More specifically, many of the children of Ru's age that my wife and I have experience of have tended to have more screen time than he does. Nevertheless, the decision was made as we started to notice the TV was beginning to be used more and Ru was becoming quite impressionable, often copying various parts of things he had seen - some good, some bad.

For example, he seemed to combat a small fear of dark corners/the unknown by yelling 'EXPECTO PETRONUM!!!' complete with wand-flick motion. On the flip-side of the magical coin, he would sometimes respond to our requests to do/not do something with a wand-flick and a spell cast noise as if it somehow exonerated him from the request.

I was prepared for the worst, genuinely convinced (being the soft-touch parent) that I would receive a barrage of requests for My Little Pony, Super-Hero Squad, or the Saw films (the latter from my wife I may add) but I have been surprised and by halfway through the month I could actually count Ru's requests on one hand.

It dawned on me that this month was actually likely to be harder on (and quite possibly more about) Emi and I, so we introduced a new rule: No TV for Ru and minimal TV after he was asleep for us. (And certainly no Skyrim for my wife.)

I'm writing this now at the end of the month and there have been some very interesting things that we've noticed. (Heeeeeeeere's listy!)

1. Ru's creativity. He has asked to do 'an activity' far more than he has asked for the TV and we have more doodles than we know what to do with.

2. My relationship with Ru. I'm not the creative parent, I love spending time with my kids but I suck at arty stuff. This month Ru and I performed our very first, completely Daddy set-up, no intervention from Mama, art based activity. We painted a pirate ship on the sea! Check us out! 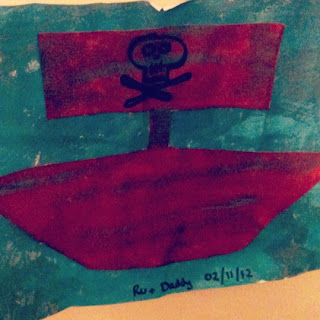 3. Ru's reading. Well, it should be 'reading' as he tends to look at pictures or have one of us read to him. Anyway, before now Ru has tended to fill his spare time with books... LOTS of books! Somehow he is now asking for reading time a lot more. In fact, I'm having to leave this post now to read 'Thomas and Friends 1001 Stickers Book'... Back in a mo'.

I'm back, we've counted everything on every page and discovered Ru can autonomously count to 10. Awesome!

4. My relationship with Emi. Please refer to the below diagram for an analogy, including wine as well.

To be honest, this month has coincided with Ru's 3rd month at nursery so you could put some of this down to his developmental stage or his recent socialisation with his new clique - and it *is* a clique, or maybe a posse? But there is an overall point to be made.

As I mentioned, I was sceptical about this idea at first. I wasn't that keen on it to be honest, but I've realised that a little more involvement from Mama and Daddy goes a long way. In fact, we've decided to keep it up (to a degree) by watching only *one* film together as a family on a Saturday evening. This will be Ru's only TV time.

I guess, that I should complete the title of this post now:

No beer and no TV makes Daddy...

Emi's VersionIn the spirit of honesty, I too was dreading 'No TV November', as we dubbed it. I genuinely thought that no television meant that I would be the one who would be doing the extra activities, crafts, playing and games that Ru would undoubtedly need to occupy his bright mind. I was expecting more exhaustion and losing-of-temper on my part.

Boy, was I wrong.

In the best way possible, Stephen has stepped up to the challenge. So much so, in fact, that very little has changed for me in the everyday schedule of our home. Whilst I have obviously relished the extra time with Ru, more importantly, it seems to have opened a heretofore closed door in Stephen's parenting skills. As he has shared, he's not the crafty parent, and there have been many times where I have had to badger him into joining us in art-based activities. Not now.

Stephen and I are a very close couple anyway (Kendal says we're 'talkers'), chatting all the way through films, critiquing, debating and discussing. With far less film viewing, I've been surprised by the further increased amounts of talking we've actually we done. We even spent one glorious night playing one another favourite songs from our teenage years (and learning that Stephen likes more cheese than I ever knew previous to this. This may be the only bad part of No TV! *wink*)

(I have added this part in afterwards, after a request for more information on how no television has affected Ru. Many thanks to Jane for this.)Ru is a normal three year old boy. He can be loud, boisterous, rough, independent, opinionated, and aggressive, typical behaviours often exhibited at this stage in a child's development.

I know that I have had some conversations with Kendal a few months ago, expressing my worries that Ru was simply being too aggressive at times, and not knowing how to combat that. He went through a phase where physical retaliation was his first response to being asked to do something that he did not like or want to do. Myself, Stephen, once or twice Kendal have been on the receiving end of this, along with Pixie and even Ava.

I remember one awful occasion at a group we go to where Ru and a boy called Dexter were very much at odds with one another for the whole session. I was feeling very embarrassed that my normally loving boy was acting like... well... a bully. Luckily, Dexter's mother Nicola reassured me that this was indeed a phase, that she had gone through it, that I would get through it, that it would pass and that no one was judging me for it. I'm not sure Nicola knew exactly *how* helpful her words were and how much they were needed at that moment.

Stephen and I added a lot of physical, aggressive play into our daily routine after reading Playful Parenting which really helped. Combined with a move on my part towards being more 'gentle' as a parent (assisted by anti-depressant medication) and consistently addressing the causes of his actions rather than rectifying the actions themselves, Ru's overall aggression dropped massively. We were relieved at Ru's first Parent's Evening for nursery when his teachers reported that they had seen no hitting or other aggression towards classmates or staff from him.

However, no one likes seeing their child being unkind to others, and there were still occasions where Ru would be too rough, whether purposefully or not. This was one of the reasons that we chose to do No TV November.

At the end of it, we had noticed a further decrease in Ru's aggressive behaviour. Whilst I cannot attribute this ONLY to the lack of television, in fact, I think if anything it is a combination of that, as well as even more activities than usual, as well as more one-on-one Daddy-Son time, that has created this.

Kendal has mentioned in her Day in the Life post about how her home feels somehow calmer with the TV off. Now, I don't know about calmer (with my two, our home is anything OTHER than calm!), but it has had a subtle knock-on effect that has rippled outward to other aspects of our daily life.


There have also been occasions this month where I simply have been unable to complete general household tidying and cleaning, because I haven't had the television to occupy Ru. In these cases, I simply left it till later, which is frustrating for me, but ultimately I suppose is beneficial for Ru. We even had a couple of days where everyone was ill that would have been SO MUCH EASIER with TV! (Although I'm proud to report that we didn't give in!)

(Having said that, Ru tells us that he was put in 'Time-Out' at nursery this week for 'hitting Alastair', but as the teachers haven't mentioned this to us, we're not sure if this is pretend or actually happened - Hmmm... maybe a post about that annoying phase that children go through where they explore lying about everything is coming!)


The most wonderful thing that has come from no television isn't decreased aggression (although that is one of the good results!) or an altogether calmer atmosphere or a lower electricity bill.

It's the strengthening of the Daddy-Son bond between Stephen and Ru. Without screen time, BOTH of their imaginations have bloomed even further. To walk downstairs and see them painting together, doing an art activity that I didn't set up... Well, let's just say it's up there as one of my favourite Proud Of My Husband moments.

We will definitely be continuing with our hugely restricted screen time amounts, although after much discussion (okay, not *that* much) we've decided that Ru loves Harry Potter WAY too much for us to remove that from the dvd collection!

However, suggestions and recommendations of wonderful, gentle films are very much welcome!

"I don't watch television, I think it destroys the art of talking about oneself."
Stephen Fry

Posted by Crafty By Nurture at 8:17 am