DaddyBlog: Is this your day?

Is this your day: get up, get dressed, go to work, stay there until the agreed upon time, go home, engage in parental activities, put child to bed, go to bed yourself?

I’m sure that repetitive sequence is familiar for many people, particularly for fathers with a stay at home partner. And it is, unfortunately, my stripped-down, bare basics day. And although I don’t particularly dread going to work, or fear the next day being quite similar to the one before, it is a sequence that I’m working towards breaking.

I want to be a stay-at-home dad. Now that statement is often met with reactions including, “well, what will you wife do?” In answer I say that she’ll stay at home as well. It’s something that we’re both working towards, namely that I don’t have to leave each morning to ‘go to’ work. I’m a writer (obviously, you’re reading this) but I’m lucky enough to actually do it for a job. I do words for cash, by day at a York magazine, (in an office with a chair, desk and toilet that only employees can use) and by night thinking up things for imaginary people to say and do. Hopefully one day people will be able to read these things in a book which they paid money for. It is my aim (and Kendal’s too) that I will soon be working on a combination of these tasks from home.

No bus ride to the office, no hour for lunch, no being away from the family for nigh on ten hours a day – just home, with the wife and the kids (they’ve already been planned – I have no say in numbers) and the freedom to work as I want.

But I'm a man – see my hairy chest and full beard– why the hell would I want to hang around the house all day with the sprogs and 'little lady'? What about my heroes? Do you think Isambard Kingdom Brunel spent all day with his Missus? No, he was out there in a top hat, looking at gaps and saying “Mmm, a bridge I think”. What about Emperor Hadrian – think he built all those walls while playing with his kids? No, he got amongst it, saying “Stick a wall there, a big one” and having homosexual sex. Don't I want to be like those men?

Yes. I like top hats and tall walls, but for me the world is a heavy place, one that can usually only be held aloft by pretending to be someone I'm not. That bearded guy that just bought four cans of fake Red Bull from the lady in the Co-op, casually joking about the sudden downpour of rain... not really me. Look, it's Howard, he's chatting to his neighbour. He's using his open, friendly face and nodding when the other person speaks... not me. Sometimes I wish I could just get on with the day, be it productive or not, without having to channel the character acting skills of Daniel Day-Lewis. Zero pretence and bullshit – that's what being at home is. Kendal knows me without my 'job-interview mask' on and seems to still love me. Which I'm both grateful for and a little surprised by.

Put simply, working from home would make me a better, more productive person. I am unfortunately the kind of chap who can get rather grumpy if external forces beyond my control put pressure on my time. By staying at home each day to write I'll never be wasting time in pleasing the people that are further down my list of concerns. Ultimately everything I'm doing, be it working on the novel or planning to invade Jersey, I'm doing for 'them indoors'. We're an Unschooling family after all and we live by those principles; have done in fact since Ava was born. It makes complete sense that both Kendal and I should be present during the day, not only for Ava's sake but also for our own. We both respect the fact that we each have our own projects and interests to pursue, those that might not necessarily fit in with Ava's day. By double-teaming it, by having the flexibility of me not being out of the house from 8am to 6pm, we are able to give each other some time and space.

So, using the medium of the internet via words, I shall describe to you just what I think about when dreaming of the days to come; days in which the words 'commute', 'meeting' and 'sexual harassment investigation' are alien.

The Ideal Day (or A Look Into One Possible Future)

We get up whenever we want. Except on days that end with the letter 'y', in which we get up when Ava wants. This is usually around 6am and to a dawn chorus of “Gass of milt! Gass of milt!” We get Ava some milk. Then as the early morning progresses, we have breakfast as a family, never watching the clock, never rushing through the task of making oatmeal and tea and coffee and toast.

At some point in the morning, possibly even as the afternoon beckons, I ascend to my study to do some writing. In this version of the future, my study was once Kendal's hallowed craft room. I won the space from here after an extremely brutal game of Monopoly - a game of which I'd previously hidden my total mastery, always leading the wife to think I thought it was dull. I bankrupted the crap out of her – so now the room is mine.

Anyway, after a few hours clickety clicking on the old 'puter, no doubt adding the finishing touches to my magnum opus in which an autistic boy... I don't know, fights dragons or summut, I come back down to join the family for lunch. We head out to the park with a picnic (its July, right now in the future) and we spend some time with the children/robots (depending how far in the future this is) exploring outside and generally being 'unschooly'.

Home. More writing. Maybe the dragon learns a vital lesson about love. More play time with the kiddies. Dinner. Story time. Bed. Repeat the next day in a completely different and refreshing order.

Nice, eh? That's the dream anyway, one that seems to be asserting itself over the current reality a little more each day. But although I'm full of dreams, I'm also a person who is tragically ruled by logic. That is why, although the above is the desired future - the life-goal - it hasn't stopped me imagining a alternate possibility; one in which I am still working from home, but in more challenging circumstances. Namely, after nuclear war tears a hole in the fabric of existence. And so...

We get up when we want. Mostly because we haven't slept - not since the Octo-wolves got a taste for human blood and we must stand guard all night. Ava declares she wants a “Gass of milt” and tenderly extends a purple tentacle to receive her drink. I nod, utter “Okay” and head out back to milk one of the colloso-bees. We have breakfast in the bunker because between 6 and 9 am is when the demons roam the dining room. We never rush. We can't, its -5 degrees Celsius down there.

I head up to my study to write. On opening the door I discover the study has fallen into the nth dimension. I close the door and tut. I sit on the toilet and type out chapter 23 of my picture book for the blind on my phone.

For lunch we head out to the park. Its the only area of open land not yet claimed by the clam people. Ava plays in the pond. At the bottom of the pond. Kendal comments that she's surprised how quickly Ava's gills have come in and how hopefully this means the end of nightly calpol doses.

While Kendal strips to the waist, daubs herself in Celtic blue and hunts squirrels with her teeth, I head to Costa to do a bit of writing. I order a latte, sit back and get cracking in relaxing, tranquil surroundings (n.b. Costa Coffee survived the apocalypse due to their espresso's high lead content which helped shield them from the initial blasts. Plus all the staff have horns).

We return home. Its fallen into the void. We tut. Story time. Bed. Repeat the next day in a completely different and terrifying order.

I've also made a plan for the eventually that Ava turns out to be the new Jesus, but won't include it here. Suffice to say, it's amazing. 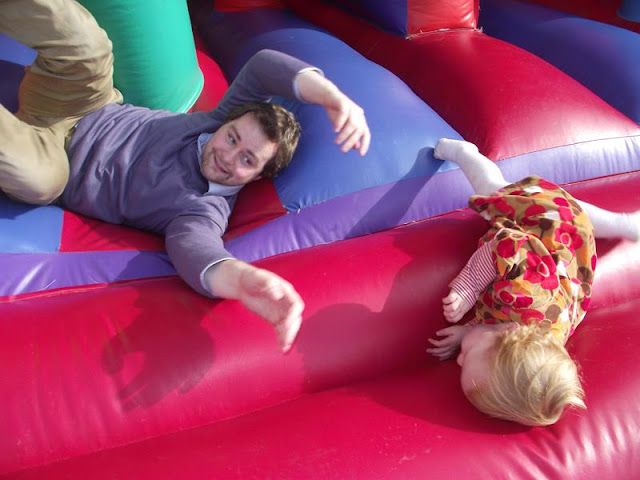 Posted by Crafty By Nurture at 1:01 pm