On being pregnant, again.

Everyone remembers the moment they first find out they’re pregnant. With Ava, I managed to covertly pee on a pregnancy test whilst Howard was in the shower, running back through minutes later, half-dressed, with a positive test waving about in my hand whilst shouting, ‘I’m pregnant! I’m pregnant!’ I remember Howard’s shocked face peering out the glass door of the shower, completely unaware of what was going on.

Not exactly smooth. So it’s not a surprise that when I found out I was pregnant again, for the second time, it took me four tests and three days to really feel certain that I was, indeed, with child. Again. After a year of breastfeeding on demand my period returned almost exactly on Ava’s 1st birthday. As good a time as any, I thought, to kind of start trying for baby number two. Five children take time, after all, and my only-child longing for many children wasn’t getting any quieter.

I knew that it might take some time since I was and still am breastfeeding Ava on demand. I read that, period or not, it can take some women two or three years to conceive again, but I was determined that nothing was going to stop me nursing Ava and somewhat naively assumed that since it took us a couple of months the first time round, it would probably follow suit again.

But then six months followed that were probably the most stressful of my whole life. We moved house three times. Howard was searching for the right job, and we were amidst near constant family drama that made it seem like it might, in fact, be the very worst time to get pregnant again. And unsurprisingly, it just didn’t happen.

During this time I was recommended a book called Taking Charge of Your Fertility which brought out a raging feminist from within that I frankly didn’t know existed. Not just about how to understand your own fertility, this book educated me in the ways of my own body to such an extent that I wondered why it wasn’t handed out to every 14 year old girl in need of answers. I started to take notice of my monthly cycle – every stage of it – and it became easy to interpret various signs and see that in fact my fertility was clearly not back to where it should be. Whether this was due to the breastfeeding or the stress, I don’t know.

But then we moved into this house and everything settled. Howard found a good job, and I felt everything in me just relax and let go. And two months later, hey-ho, I was pregnant. And really bloody happy that it hadn’t happened in amidst turbulent times, when I would surely have been constantly worried that such stress was having a negative effect on a baby.

Still, nothing quite prepares you for the feeling of seeing that line on a test. Even if at first that line is very faint, just the suggestion that somehow, without you knowing, this incredible, life-changing thing has happened, is not the easiest thing to process. In fact, it doesn’t quite seem real until my body starts to react to the surge of pregnancy hormones and sickness and exhaustion take over.

The past nine weeks have been challenging in a number of different ways than it was with Ava. Unexpectedly, I’ve been more sick this time around, but I’ve been able to nap with Ava for a couple of hours most days which means I’ve not been quite as bone-tired exhausted as I was when I was working. We’ve watched a lot more films during the day than I ever thought we would, but sometimes it felt like lying on the couch with Ava and watching Mary Poppins for the twentieth time that week was all I could muster. You begin to understand that it’s okay to let go of some things, to compromise.

Most days I waited for Howard to get home so I could run upstairs and fall fast asleep in bed. My ‘morning sickness’ was worst between 5 and 7pm at night, which meant eating dinner was impossible.  However this time round, instead of going off meat/protein, I actively craved it. I discovered almonds not only stopped the first trimester heartburn that seems to occur, but it also helps with nausea.

As for breastfeeding, my feelings have changed a little. I still nurse Ava and it’s my hope that I continue to do so until she wants to stop, but I find myself discouraging it more and more, since it has added an extra feeling of being drained that I didn’t expect. I have never been worried about nursing whilst pregnant – I’ve read enough to know how natural and possible it is but I’m sure my milk supply has gone right down already, and I can tell by the way Ava responds that she has noticed. I suspect that she is one of those children who will happily nurse through the next six months, milk or not, rather than wean, but we’ll see, I suppose. The logistics of sleep nursing with a huge tummy seems a conundrum.

And now here I am, about to enter my second trimester tomorrow, having mostly passed that really challenging stage, and wondering how it is that I could possibly have two children. Two human beings that depend on me. Two children I love as much as I have one. It is a concept very hard to understand. Perhaps more so because this time around, with a rambunctious toddler running around, I have had so little time to focus on being pregnant, to fantasise and ruminate on who this little person is.

Again, so different than the first time round, when all my thoughts were focused on one thing and one thing alone. The advantage to this, I think, is that your body just gets on with doing what it has to do, and you don’t have the time to worry and panic over every little thing. I’ve managed to write a few lists which mostly consist of slings, reusable nappies, a sheepskin and little things I want to make, but so much less to buy than last time. Unless of course I get carried away with the beautiful range of slings I covet almost daily. No pushchairs, no Moses basket, and certainly no Pampers.

When we were notified our first scan would fall on Ava’s birthday, I thought it a particularly lovely stroke of luck. I didn’t feel too nervous this time, in part because my body is so unbelievably sensitive to hormonal changes that it’s somewhat of a comfort to feel so sick, as if you can really believe that something big must be going on.

But at the same time, lying on the hospital bed with Ava and Howard next to me whilst a huge picture of a little baby flickered on screen – I also felt incredibly relieved. There it was – there he or she was. Proof that there’s a human being growing at a phenomenal rate inside me. Proof that I haven’t just been imagining the past three months, complete with fabricated pregnancy symptoms and a swollen tummy.

A little fluttering heartbeat, and hands that flicked around everytime my tummy was prodded.  A near identical profile to Ava’s scan. And for the first time since finding out I was pregnant, I really did feel a rush of love, of protectiveness, or warmth towards this little person. I understood for the first time how easy it would be to love another person as much, as unconditionally, as I do Ava. Love is not a pie after all. And as I lay there with this baby bobbing around on screen and inside me, whilst Ava clambered to get up beside me and Howard earnestly tried to divert her attention towards the picture of her new baby brother or sister, it seemed like the most easy thing in the world to just welcome another person into our family.

Ava tells me the baby is a boy. I’m inclined to agree. She likes to pretend-feed my tummy blueberries and sometimes, if she’s feeling particularly generous, yoghurt covered raIsons. She is the first to remind me at dinner to take my ‘preggy pill’, which has become her job. I have a feeling she is going to be the most amazing big sister, and everytime I imagine it I am flooded with gratitude for our growing family. These are good days. 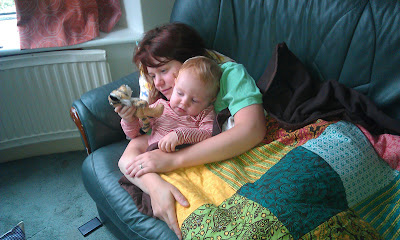 Posted by Crafty By Nurture at 9:47 am