We had a sad thing happen recently.

One of our cats, Tasha, a beautiful black witch's cat with green eyes, was run over and killed outside our house.

As awful as it sounds, these things happen. It's one of the hazards of owning a pet. Especially when you live next to a road and own cats that go outdoors. It doesn't make it any *easier* knowing this when you're burying the first pet you and your husband ever got together.

Sat on the grass outside my house, stroking Tasha, I was thinking several things, namely wondering why the person who hit her drove off, combined with relief that her death was obviously instantaneous and with minimal suffering, gratitude for the two women who saw it happen, moved my cat off the road and knocked on doors to find the owner, and worry.

Worrying how I would explain this to Ru.

Don't get me wrong, I think my child is smart as hell. But in the end, he's only three.

How do I explain death to a three year old, in terms he can understand, in the midst of my own sadness, giving enough detail so he understands the situation but not enough that it overwhelms him?

I am reminded of a situation when I was a nanny. One of the little girls I nannied and I were walking to the park when she asked me "On the weekends when you go home and see your Mummy, does Stephen go and see his Mummy too?". I stopped, knelt down next to her and explained that Stephen's Mama died when he was very little, so he couldn't see her anymore.

She then asked me if Stephen was still very sad about it, to which I replied that he was at the time, but only a little bit now because it was a long time ago.

We carried on towards the park when suddenly she stopped, gave me a thoughtful look and asked "When someone dies, we can't see them any more, can we?". I confirmed this. She seemed accepting of this, and went off to play on the swings.

Our day proceeded to carry on as normal, and the little girl didn't mention the subject again...

Until about 2 hours later when she suddenly announced in front of her mother and grandmother, in the loudest *possible*, matter of fact, in a strong Bradford accent...

Both hilarious and awful at the same time.

Cue a conversation with her mother, that resulted in me resolving that when I had my own children, I would always be honest with them, especially about things as serious as death.


Which brings us back to the present day.

Luckily, Tasha looked perfect still, apart from an exploded eyeball. I profusely thanked the women for coming to find me, and took Tasha inside. Irrationally, I was thinking that I couldn't leave her outside in the garden, so I put her in the spare bedroom on a blanket, arranging her so her damaged eye was hidden.

I then went downstairs, informed Stephen who was at work at the time, and text Kendal who duly came round.

Whilst waiting for Kendal to arrive, I took a deep breath and in the absence of Stephen to discuss it with, but knowing he values honesty as I do, I decided to be gently honest with Ru.

I swallowed, and began to explain in the best way I could given the situation, that Tasha had been crossing the road and a car had hit her. Giving him a few moments to process this information, he asked where she was. I told him that she was upstairs and he asked if he could see her.

Now, I know that some people will think I am stark raving ballybonkers for letting him, but that resolution made years before to be honest with my children had come back to the forefront of my mind.

I took him upstairs, and we sat next to her. I cried a little. He rested his hand on my knee, more empathy in that one little gesture than his three-year old vocabulary could express.

"Why are you crying, Mama?"

"Because I feel sad about what has happened to Tasha. She is very special to me."

He stroked her a little, kissed her fur, and told me very seriously "Millie will be very cross at that car for hitting Tasha. She will EAT that car up." (Millie is another of our cats). We went downstairs and he didn't mention it again.

Two of the other cats, Millie and Harrogate, weren't bothered about Tasha. The littlest, Yuli, was desperate to get in the room that Tasha's body was in, and when I finally let her in, she groomed her friend, making sad little mewling noises.

Seems that I wasn't the only one who understands loss.

When Stephen returned home from work, both kids asleep, we both cried, me more than him. We buried Tasha at the bottom of the garden the next day.

Ru said goodbye to her, stroking her silky fur as I explained that we were going to bury her in the garden, that her body would break down and become the earth that would help our flowers and vegetables grow.

We have three other cats, and won't be getting another one right now.

In the end, honesty governed my choices. Death is a natural part of life. Stephen and I have always aimed to be honest with our children, including death. Some people may be aghast that Ru was allowed to see Tasha after the accident, but I felt like he needed to understand that she was dead, and that that was final, and not just some abstract concept.

I did not write this to defend my actions.

I wrote this to explain why I feel that honesty is so important when it comes to children, in every aspect of our lives together. I had someone tell me that I should have hidden how I was feeling from Ru, not cried in front of him. I disagree. I think it is important for Ru to see both his Mama and Daddy being open about their emotions.

Life is a beautiful, amazing, wondrous thing, but as the seasons pass, the tides go in and out, the weather changes, so do our lives. Death is a part of that. We follow the natural cycle of the seasons in our home, the gentle changes... Life, growth, death, rebirth.

So many positive things have been garnered from her death.

A new found appreciation for those carrying life...

A friendship begun with one of the women who saw Tasha get hit, who has a son in the same nursery class as Ru...

An opportunity for Ru to learn and experience...

A wonderful reminder that there are good people in the world,who comfort strangers in their sadness, who care enough to go knocking on doors to find a hurt cat's owner...

And an affirmation that pets are such an important part of childhood.

They teach children about the joy of caring for others, responsibility, love, respect, as well as how far you can go pulling a cat's tail before it scratches you... I could go into details about how pets can help calm the stresses of autistic children, how people with pets live longer, have lower blood pressure, the benefits of pet ownership for children, but that doesn't seem right here. For another post, I think.

So, I share with you my fond, happy memories of Tasha. A black witch's cat with green eyes, who came to us as a scared, skinny, underfed, cowering, wee thing. A cat who used to overgroom to the point of baldness when she was left alone. A cat who snored. A cat who gently headbutted those she loved. A cat who when Ru cried as a newborn, used to come from wherever she was in the house to sit next to him. A cat who hated tomatoes but ate onion. A cat who used to throw up A LOT, usually on the only bit of carpet we have in the house, usually discovered by me standing in it. A cat who taught my son so many valuable lessons.


A house is not a home without a cat. And love. And honesty. 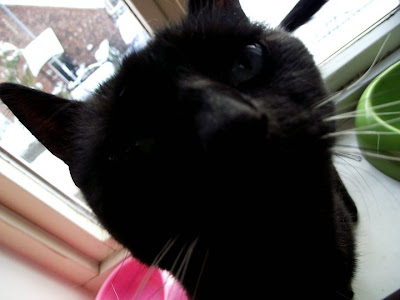 Posted by Crafty By Nurture at 9:17 am